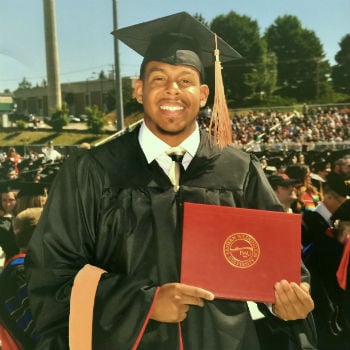 Kevin Winford II got more than a name from his father. The former Eastern Washington University basketball player also obtained the motivation to earn a Master of Business Administration from him.

“After finishing my undergraduate, I was trying to figure out what route I wanted to go,” Winford II said. “My dad got his master’s degree while he was in the Air Force and raising two kids. I was reflecting on that experience and saying, ‘I might as well get my master’s degree now.’ I knew I eventually would get it. I figured since I was already in school mode, it was best to go ahead and get it done.”

“I love the area and the close-knit community of Cheney,” Winford II said. “When they brought me down for an initial visit, I fell in love with it and the overall feel of the campus. Playing basketball for Eastern and going to school there was a great experience.”

After Winford II completed the bachelor’s degree program, he was hired as a part-time specialist for an IT company. He switched to full time after earning an MBA.

“I made it a career and started climbing the ranks,” Winford II said. “It is a great place to work. I enjoy it. I love Seattle so much. There are a lot of things to do. It’s green. It’s beautiful in the summer.”

Winford II was born in Wichita, Kansas, and lived in Japan and California before settling in Anchorage, Alaska, where he was a star basketball player at Bartlett High School. He earned a scholarship to EWU and was a regular on the Big Sky All-Academic Team.

“When my dad went into the military, we moved a lot,” Winford II said. “I’m not really from anywhere. My roots are in Chicago, where my parents are from, but I’m a military kid.”

Once Winford II arrived at EWU, he needed to decide on a major. After missing a couple of shots at psychology and computer science, becoming a business major was nothing but net.

“Business attracted me because the curriculum is so diverse,” he said. “There wasn’t one specific thing. I could go finance, management, management information systems or accounting. All of the different departments attracted me and helped me learn different aspects of running a business. It gave me the resources to develop those skills.”

The Leadership and Ethics course was Winford II’s favorite in the MBA curriculum because it laid the groundwork for his current role, which he started a year-and-a-half ago.

“The course provided a lot of practical experience about what it means to be a leader,” he said. “One of the standout moments was when we got into a group and did a module on a computer where you are assigned different role-playing skills.

“If you are assigned to be the leader, you see how to use each individual’s skills to perform a task, which taught me that everybody has different skills. It also gave me good leadership habits I’ve taken and held on to.”

Before Winford II graduated from the MBA program, he was applying the skills he was learning to his job and preparing to be a leader off the court.

“Even when I wasn’t a manager, I had the background with my MBA that helped me put myself in position as a manager already,” he said. “I was doing different things I learned through the MBA program, influencing the team and other leaders. It was a different way I moved throughout the company because of my experience that helped me get to this point.”

The cheering for Winford II didn’t stop when he hung up his basketball shoes.

“My friends and family supported me throughout the process,” he said. “At the time, I was finishing my undergrad, getting my graduate degree, working part-time and doing an internship, as well. I was very busy. I’m super happy I did it — especially at Eastern.”

The support didn’t stop there. Winford II also utilized all of the resources available in the MBA program.

“You have to be prepared to be challenged and go all in,” he said. “Really build the relationships with your classmates and your professors. Pick their brains. You have to have a different mindset than you had in undergraduate. Really embrace the program and learn all that you can because it is what it will be like in your professional career.”

Just like what Winford II did on the hardwood, he hopes to continue elevating his game in the Apple Corporation and beyond.

“I want to eventually own a business down the road,” he said. “I don’t know what kind of business it’s going to be, but I’d like to be an entrepreneur and do something that is going to benefit the community. The MBA program helped prepare me for leadership I fully encourage anybody to get into the master’s program at Eastern.”